Sperm whales are not only the largest toothed animals, they also have the largest brains of any animal on the planet. These whales are incredibly intelligent and possess complex social structures. They are matrilineal, i.e. male sperm whales live relatively isolated lives while females live in groups – mothers with daughters and children. One or more matrilines or families form a unit, and similar units form clans (Figure 1). 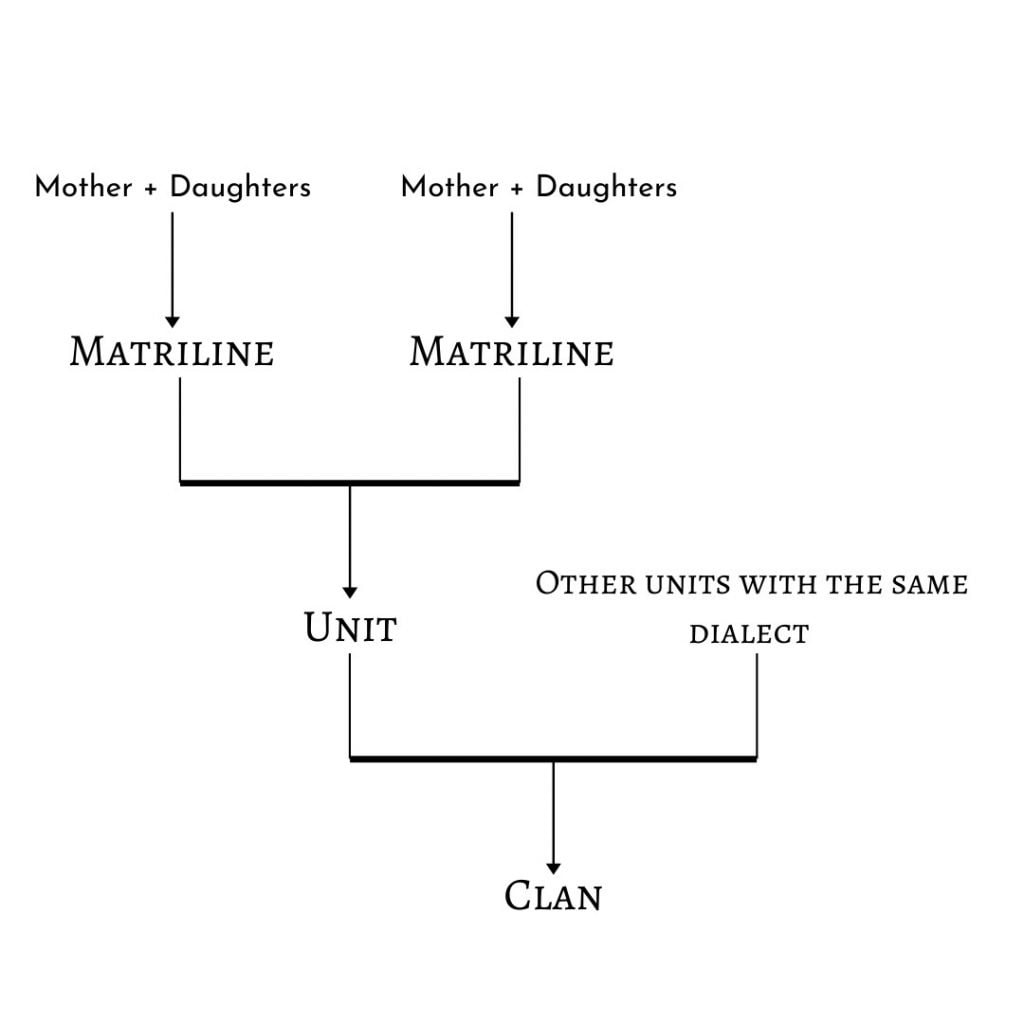 Sperm whales communicate with one another using patterned series of clicks called “codas” which sound a little like if sperm whales used morse code! But not all sperm whales use the same codas (where’s the fun in that!), instead different clans often have uniquely different sets of codas made up of different rhythms and patterns of clicks! Each clan’s distinct repertoire of codas is almost like an accent or dialect.

The fact that each clan has a different dialect, and that each member of the same clan shares that dialect is evidence that sperm whales have different cultures. Culture that is socially transmitted vertically from mothers to daughters and onwards to their offspring, or horizontally between peers.

An excellent illustration of how sperm whale culture works  comes from the  population of the Eastern Pacific. The population in this ocean basin can be divided into a number of clans. While the clans are all genetically the same what does differ is the dialects they use, where they travel in the Pacific Ocean, and what prey they feed on. The waters near the Galapagos Islands are inhabited by two main clans of sperm whales. For ease of understanding, let’s call them Clan A and Clan B. Each of these clans have a different food preference. During ‘regular’ years, Clan A is more successful at feeding than Clan B  as its preferred prey is more abundant. However, during an anomalous El Niño[1] event, when warm water currents drastically change the prey populations, Clan A has  much reduced feeding success while Clan B , whose prey is not  affected by El Niño, maintains the same, consistent feeding success rate. This reminds us that sperm whales across different oceans have distinct cultures and lifestyles – just another indication of how intelligent these majestic creatures are!

Sri Lanka is home to an amazing population of sperm whales whose codas (or dialect) remain shrouded in mystery. Through The Sri Lankan Sperm Whale Project, we aim to find out what the Sri Lankan sperm whale dialect sounds like and the codas they use to communicate. To do this, our team at Oceanswell work under the support and guidance of Dr. Shane Gero of the Dominican Sperm Whale Project, to collect audio recordings for analysis. These recordings will be useful for unravelling the intricate mysteries of these deep water leviathans and giving us further glimpses into the lives of these elusive, magnificent animals.

Stay tuned as I eavesdrop on their mysterious lives and share what I learn!